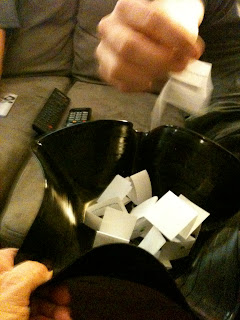 I have done the random draws for the Pattern Pyramid and for the Sew Grateful Giveaway. I decided to go very low tech with the draw. I printed and cut out the comments and then interrupted a rugby game on TV to ask for help from other members of the household with the draw. 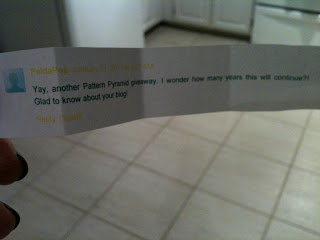 The winner of the Pattern Pyramid is Lisa who blogs over at Poldapot. So the pyramid is off back to the US 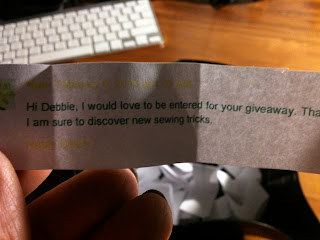 The winner of the Sew Grateful Giveaway is Jacqueline who blogs over at The Cutie kipepeo and lives in Kenya. Jaqueline says that it is nearly impossible to get sewing books and patterns in Kenya so she was super excited to win the Singer sewing book and 1970s jumpsuit or dress pattern.

That was my first two giveaways and that was such fun. I’ll have to do this more often!!!

In case you were wondering what I used to draw the names out of, it is a record bowl. I recently did a 1970’s Disco themed birthday party for my husband, and I softened records in the oven and moulded them into chip bowls. All records used were bought from charity shops and were very scratched, no priceless classics were ruined in the making of these bowls!!
Posted by Debbie at 6:16 PM