I was sitting at work the other day when my cell phone beeped with a text message. It was from my younger son, the message was along the lines of “I don’t want to spring this on you when I get home on the weekend, so I thought I’d mention it now……” before I could scroll down to see more of the message I was thinking the worst (as mothers often do!!). Turns out he wanted me to fix his winter jacket as he will be taking it back with him.

This was a jacket he was wearing back in February and one morning announced very nonchalantly that it got a little ripped the previous evening. When I looked at it, it was ripped from the cuff to the waistband luckily along the seam. But it was the shell fabric as well as the lining. I hate mending, I really do. I would rather make something from scratch, so had left the jacket on my cutting table for these last 7 or 8 months. Turns out it took less than half an hour to fix and looks like new!! 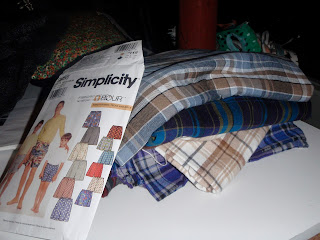 But under the jacket had been hiding 6 pieces of flannel fabric and a pattern for men’s boxer underpants.  I had purchased the fabric and pattern late last year (September?) with the intent of making the males in my household some undies with Peter over at Male Pattern Boldness. I had washed and ironed the fabric, taken measurements and then somehow kept putting off starting them and hence the pile ended up hidden under the jacket.

So I whipped up the first pair of boxers.  Again, so quick to do and yet I had put it off for so long! Hopefully I can get the other 5 done in the next few days and another thing off of my sewing table.

Don't you just hate putting things off only to discover that how quickly you can get it done when you actually get round to it. The story of life!!
Posted by Debbie at 10:34 PM