The Playsuit and the Cosmo Bag 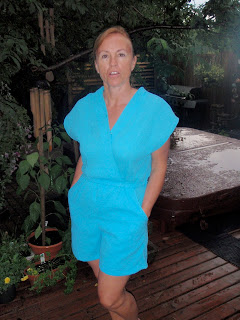 A couple of weeks ago, I blogged that I had been at the beach (Turkey Point, Ontario) and had seen several playsuits and decided that I had to have one. I looked around a settled on a McCalls pattern  M6083, because it was easy and I haven't had much time to sew recently. 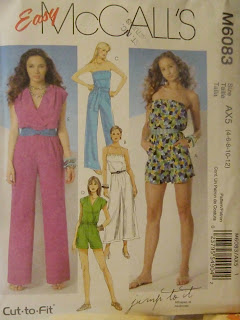 It was easy to sew. I chose a blue crinkle cotton (not sure the correct name!) and chose to underline the shorts as I thought they might be a bit see through. I also added a snap fastener as it gaped open a bit at the front.

My only problem is that it is not easy to get in to. The shorts are fine and then you really have to squeeze your arms and shoulders through for the top. But it will be fine as we are running out of summer and I can wear them on our camping trip next weekend. Which will also be a Self Stitched September opportunity!


Then my other sewing this past week has been another Amy Butler Cosmo bag. Exactly the same as my first one. A friend had admired mine, loved the colours and now she will her own as soon as I drop it off with her! The fabric was from the second of two curtains I bought in a charity shop on a trip to the UK a couple of years ago. They were going to be for blinds in the kitchen, but that never happened!! Mine is lined with green and my friend's is lined with mauve, so we will be able to tell them apart!